Drum legend Steve Gadd is on tour in the Netherlands in February 2020, together with harmonica player Hermine Deurloo, The Big Apple Band, and special guest Alain Clark.

The reason for this tour is the release of the album “Riverbeast” by Hermine Deurloo.

Tip: “Riverbeast” is on Spotify (bit.ly/riverbeast) and you can also get the CD directly from Zennez Records.

There’s a big chance that you have Steve Gadd in your music collection and a 100% chance that you’ve already heard his work. Drummer / producer Steve Gadd can be heard on albums by, for example, Paul Simon, Paul McCartney, James Taylor and Steely Dan. But he’s also very successful with his own Steve Gadd Band: in 2018 the percussionist won a Grammy Award. Now he’s featured on the album “Riverbeast” by harmonica player Hermine Deurloo, whose work also won prizes: winning the Bernie Bray Award, she followed in the footsteps of Toots Thielemans and Stevie Wonder.

For recording and performing live on “Riverbeast“, The Big Apple Band has been put together, with a unique collection of top international musicians. Special guest, vocalist Alain Clark, together with Luca Benedetti, Jon Cowherd, and Tony Scherr, were previously on the payroll of greats such as Iggy Pop, Chaka Khan, Herbie Hancock, Norah Jones, and Snarky Puppy. Separately good for countless successes, together on a stage they form a living pop catalog of the past five decades.

Riverbeast is a cheerful album filled with catchy pieces in a funky style. The music is lively, while Deurloo’s harmonica is consistently lyrical and natural. — Johan Bakker, Nederlands Dagblad 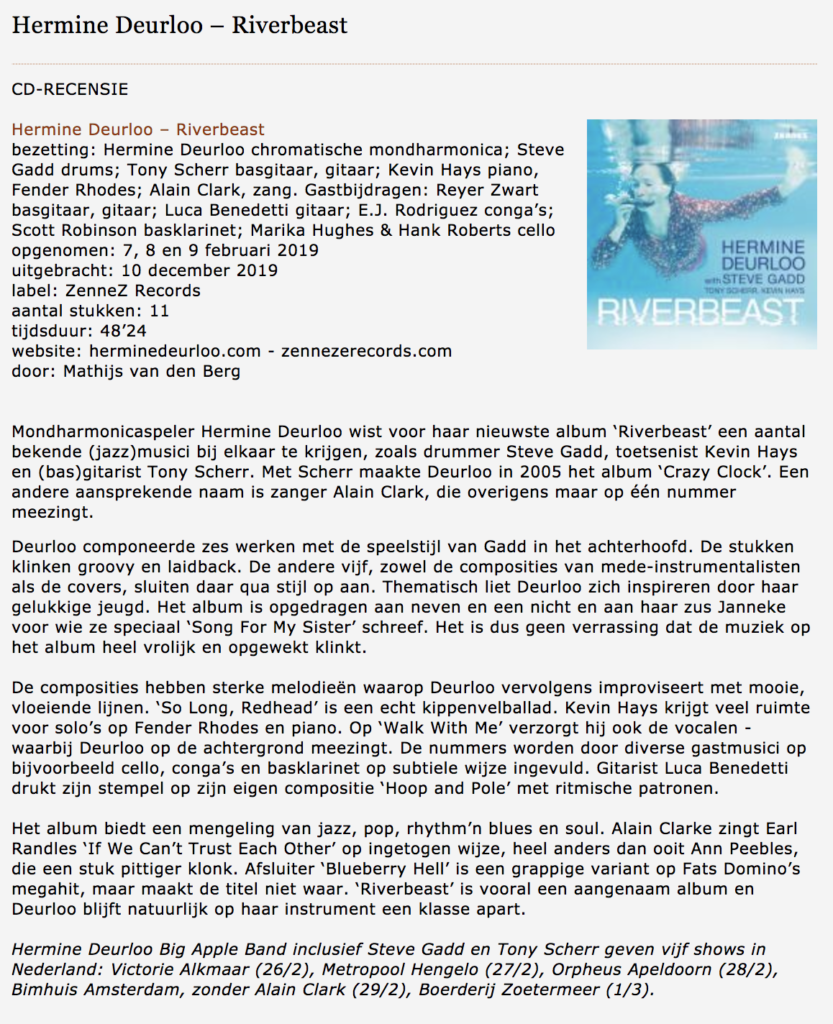