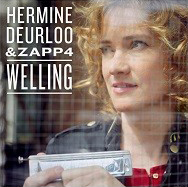 “It is a sure bet that very few recordings feature the instrumentation of chromatic harmonica and a string quartet, but few harmonica players are on the level of Hermine Deurloo. Based in Amsterdam, Ms. Deurloo studied saxophone at the Amsterdam Conservatory while teaching herself to play the harmonica. She has performed with the Willem Breuker Kollektief, the Metropole Orchestra and other European groups. Like the great Toots Thielemans, she has worked in the studios and appeared on soundtracks. And like Larry Adler, Thielemans’ predecessor, she is capable of playing a wide variety of music.” — Scott Yanow, LA Jazz Scene, September 2015

“Hailing from the jazz rich scene of Amsterdam, Hermine Deurloo brings a modernistic sense and sensibility to her instrument of choice – The Harmonica. Her musical canvases are flush with rich coloring and texturing, with brush strokes of chamber and classical adding to the fullness of her modern jazz soundscapes, as the title track from her new album demonstrates.” — West Side of Jazz, July 2015

“For music that’s got a folksy charm and affable personality, there’s an engrossing introspective side to this album, too. Deurloo’s chromatic harmonica dances around the slashing lines of a string quartet, and the crosshatch of furtive motions, deep melodicism and warm harmonies is pretty addictive. Lively music that’s likely inspire all kinds of daydream imagery.” — Bird is the Worm, July 2015

“Hermine Deurloo’s collaboration with Zapp4 is an especially interesting experiment that works out surprisingly well. Over the past weeks, I have appreciated ‘Welling’ more and more each time I listened to it anew, as an exciting musical journey. An absolute recommendation for music lovers who are open to experimental yet really accessible jazz music!” —  Fred Pach, MuziekWereld, July 2015

“Welling is a surprising adventure in the jazz world, led by Hermine Deurloo (chromatic harmonica), with the Zapp4 string quartet. You don’t often hear a string quartet together with a chromatic harmonica. The listener is treated to a musical journey with diverse styles in which there is place for swing, improvisation, interaction, and grooves.” —  Stefan Koer, Concerto, July 2015

“Welling swings, loose and relaxed, while sometimes you hear chamber music and free improvised jazz. All in all, Welling is a laid back album with 9 top notch pieces of innovative collaboration.” —  Hanz Invernizzi, JazzFlits, July 2015

“Hermine Deurloo is not just another harmonica player, and Zapp4 is not just another string quartet, because they each have a solid grounding in jazz idioms. The music is of an enjoyable lightness and elegance. The sounds work together very well and add value to each other.” — Jan Jasper Tamboer, Parool, July 2015

“Each composition has a unique and persuasive feel to it. From light and sunny to fascinating and intense, and everything in between.” — Mischa Andriessen, Trouw, September 2015